The story of the crashed eggs

Scrambled eggs, cracked eggs or fried eggs, no matter what you call it: it is an unrivaled delight whose origins go back a long way (even before we existed).

And it continues to be a typical Madrid dish in many places (we also serve delicious ones with ham). But … since when have they been made like this?

Probably one of the most famous references dates back to 1846. Then, the English traveler and Hispanicist Richard Ford spoke of this dish in his book “Gathering from Spain”. The author described them as a gastronomic resource for humble families.

But there are those who trace this simple (and delicious) delicacy much further back in history. Specifically to 1698. Date in which the painting “Old woman frying eggs”, by Velázquez, is dated. An oil that many associate with a still life because, despite showing a traditional scene, the protagonists are the same as those in this article: the eggs. 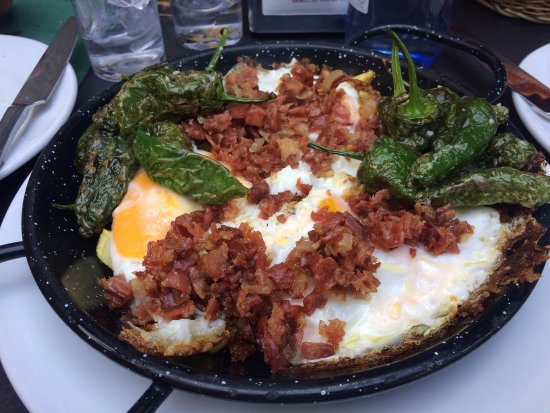 Broken eggs also appear in the letters that Lope de Vega sent to the Duke of Sessa in 1612. The writer speaks of them in his epistle number 82, when he relates that “I read some verses with Cervantes’s glasses, which were like starry eggs badly done ”.

But it is precisely to him, to Cervantes, who has historically been attributed the first reference to this dish:

“A pot of something more cow than ram, splashing most nights, duels and losses on Saturdays, lentils on Fridays, some added palomino on Sundays, consumed the three parts of his farm.”

This is the second sentence of Chapter I of Don Quixote. After exposing the origin of his ingenious hidalgo, Cervantes defined him through his way of eating.

And here it is, precisely, on pages 69 and 70 of the most universal work of Spanish literature, where we find the first reference to what we now know as broken or starry eggs. It is therefore that we could venture to say that the origin of this essential dish of our gastronomic culture has its origin in Castilla-La Mancha more than 4 centuries ago.

Come to El Anciano Rey De los Vinos and taste them: we assure you that you will repeat.