Where does Sant Valentine Day come from?

It is a celebration that many identify with trade promotions, but that the most romantic continue to retain as a tradition of an extremely special day. But … do we know where the Valentine’s party comes from?

The origin of Valentine’s Day dates back to the third century, in Rome, which is based on a legend that tells the emotional story of a priest who challenged the orders of the Roman emperor Claudius Aurelius Marcus Gothicus, Claudio II, who had banned the celebration of marriages for young people, because in their opinion single people without family and with less ties were better soldiers.

The priest Saint Valentine considered that the decree was unfair and secretly celebrated marriages for young lovers and that is why he was martyred and subsequently executed on February 14.

Emperor Claudius ordered that Valentine be imprisoned. Then, Officer Asterius, in charge of imprisoning him, wanted to ridicule and test Valentin. He challenged him to return his sight to his daughter, named Julia, who was born blind. Valentine accepted and, in the name of the Lord, returned his sight.

This fact shook Asterius and his family, who converted to Christianity. Anyway, Valentin remained imprisoned and the weak Emperor Claudius finally ordered to be martyred and executed on February 14, 270.

The young Julia, grateful, planted an almond tree with pink flowers next to her grave. Hence the almond tree is a symbol of lasting love and friendship.

But making gifts like flowers or chocolates on Valentine’s Day is something of the twentieth century. That is why Valentine is considered the patron of lovers.

After Pope Gelasius I appointed on February 14, 494 the first official Valentine’s Day, the holiday was included in the traditional liturgical calendar and was celebrated by the Catholic Church in the next 15 centuries.

But in 1969, under the pontificate of Paul IV and after the Second Vatican Council, it was removed from the calendar. Thus it became a date with saint but without celebration. But it was too late. The celebration had taken root in several societies.

And Galerías Preciados launched the party

On Valentine’s Day, relics were kept in Calatayud or Toro, but until 1948 no one in Spain associated this third-century Italian saint with lovers. It was the horned José «Pepín» Fernández, founder of Preciados Galleries, who brought the Anglo-Saxon tradition of giving flowers, gifts or sweets to the loved one.

The idea was launched by the writer and journalist César González-Ruano in the newspaper “Madrid”: “Mother’s Day, a feast of a beauty difficult to overcome, was not in the Spanish tradition and I think it was a success of the New Spain adopt and stimulate this idea and introduce it into our customs. Now we would like to be the first to launch the possible adoption of Valentine’s Day, which exists in America, where Valentine’s Day is celebrated with great show on February 14 ».

«Let’s take a good look at that February 14th is not called the Wedding Day, but much more widely” in love “. Not always in love or in love is a boyfriend or girlfriend. He may want to be or have been and not already be … And, behold, the gift, converted into a symbol, may well serve as a gentle intermediary with a secret word or as a prize for the love that seemed to drown and that thus says to exist and still await the green bank of hope .. ”, added the journalist and writer. 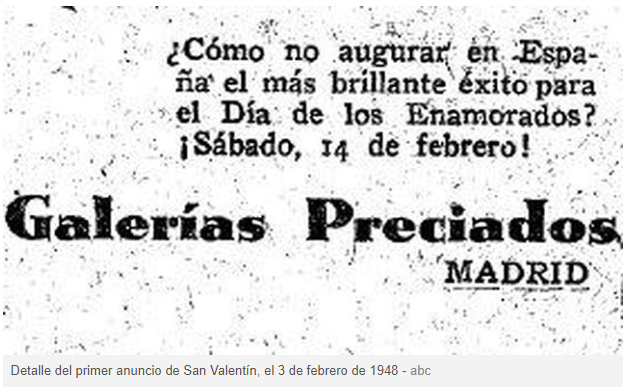 Days later, Galerías Preciados picked up the glove in an advertisement inserted in ABC. «How not to predict in Spain the brightest success for Valentine’s Day ?, wondered the publicity of the department stores that for the first time called its celebration on« Saturday, February 14! ».
Be that as it may, in Spain it is a more than entrenched custom that we plan to continue celebrating. At least, if it is not with a gift, let it be with a dinner (or meal). By the way, that in The Elder King of the Wines we are open and waiting for you with open arms. Do not wait to make your reservation!