4 Legends of passion … from Madrid!

In the month of love, we did not want to miss the opportunity to talk about passion legends … Although it seems the title of a movie, “have them, there are,” as they say in northern Spain. And there are … but what you may not know is that Madrid has very beautiful legends related to stories of great passions. So today we bring them to you:

The bridge of Segovia Street, very close to where we are, has been the enclave chosen by many unfortunates to say goodbye to the world. In 1875, the suffocating nineteenth-century society prevented a woman from enjoying the love she felt for a traditional lover without wealth to offer as a gift to her demanding family. Her man was an honest and handsome shoemaker from Carabanchel, who had bewitched her with a smell of liniment and kisses. The impossibility of being free in the arms of the person she had chosen to share her life was plunging her into a depressive state. With few options in his hand, he decided to walk his melancholy over the bridge opened in 1874. He had not been the first person to think about using it for the purpose for which he has been famous in Madrid. In a moment of despair he saw it clearly. He didn’t want to move on without his love.

After a moment of doubt, he decides to throw himself into the void, but Cupid’s whims or who knows, perhaps Valentine’s Day, are playful. Her petticoats and her Victorian dress that had corseted her became a parachute that managed to reduce the impact and take her safely to the bottom of the ravine. Other less bucolic versions speak of their clothes being hooked with trees preventing their fall. The parents grateful for the miracle changed their minds and in the end she and her shoemaker were able to get married and enjoy a long life in common. The paratrooper in love died after giving birth to her fourteenth son.

Anyway, at least that day, he was saved … thanks to love.

Any lover who boasts of themselves has walked through this French-inspired park created to love life and its pleasures. The XII Duchess of Osuna, María Josefa Pimentel, had a real obsession with owning the most luxurious leisure center that had been created in Madrid. And her husband pleased her by buying some land and commissioning renowned French architects to blow her imagination to create a place where lovers could play … love. At that time, there were water channels that communicated other parts of Madrid with this park, so the duchess, a patron of artists, showed her whim to the aristocracy with anthological parties, suggestive dances and furtive loves, which were lost by her labyrinth or they lay in their gardens.

Over the years, and during the civil war, they housed bunkers inside, but later it was recovered and they remain standing as a memory of the most sophisticated and romantic love.

It is located on the Paseo de Alameda de Osuna, in the district of Barajas. 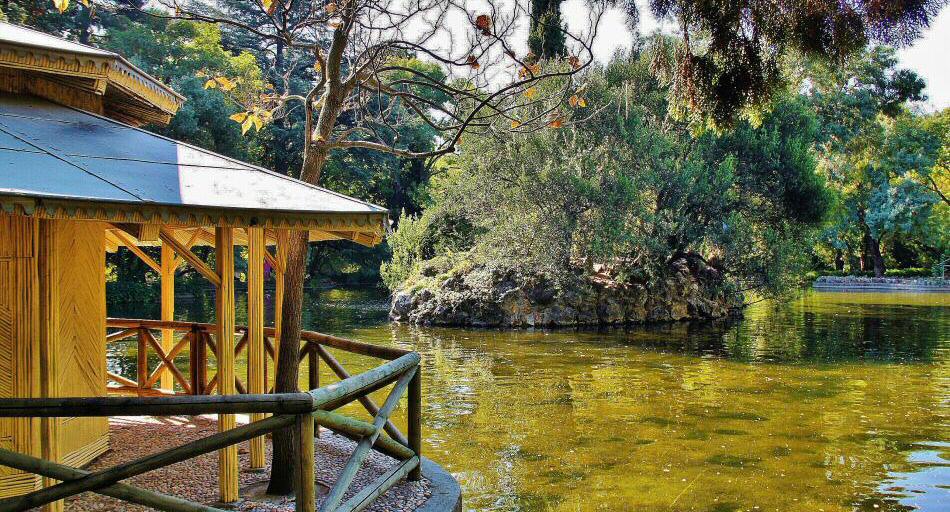 Strange as it may seem, it is possible that the hazards of history have turned the patron of lovers into another bad day. This Roman presbyter was known at the time of Emperor Claudius II for risking his neck by marrying young couples who wanted to certify their love in hiding. The empire had forbidden marriage links believing that single men served legions better, without fear of losing the love that awaited them by the fire in their bed. After his decapitation, all the lovers pay homage. Few of them know that perhaps their remains are in the church of San Antón, currently crowned with neon lights and serving the noble purposes of Messengers of Peace. Next to it, stands the headquarters of COAM and its modern Bosco de Lobos terrace, in what may be the most successful Valentine’s plan. Other cities dispute this privilege, but it seems that the saint arrived in Spain in the eighteenth century as a reward of the papacy to the work of Carlos IV.

A cross as a symbol of eternal passion

In the time of Philip II, on Sacramento Street in Madrid, a house was built until 1972 in which a somewhat dysfunctional Arab marriage lived in the 17th century. The husband was a merchant who was years old and had married the most glittering young beauty of the city. A horny Christian imprisoned for his passion for the girl set out to seduce her. In the absence of her husband they both met in that house converted into a love niche. Appointments were repeated regularly until one night she waited with her nightgown contemplating the candlelight of her bedroom until they were consumed. The strange disappearance of her passionate Christian left her in suspense. Years passed and his mourning consumed her in silence.

One afternoon, her husband passed away and she wanted to give her home a new look. His horror was indescribable when he discovered his former lover sandwich in one of the walls of the house. From that moment – and in honor of the love of his life – he decided to convert to Christianity. As a symbol of his great loss and everything that could be and was not, he ordered a wooden cross to be installed on the roof. Forever this romantic enclave was renamed the House of the Wooden Cross until its disappearance in the twentieth century.

There are many more passion legends in our beloved city: so many years of history and so much to tell …